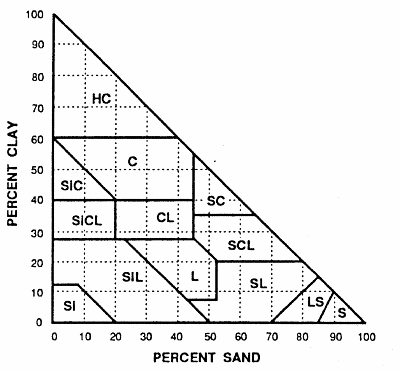 Mineral soil is a mixture of various- sized mineral particles, decaying organic matter, air, and water. The mineral particles, exclusive of stones and gravel, may be grouped into three particle-size fractions: sands (soil particles between 0.05 and 2 mm in diameter), silts (soil particles between 0.002 and 0.05 mm in diameter), and clays (soil particles less than 0.002 mm in diameter). The relative proportions of these particle-size fractions in a soil determine its texture. The textural triangle (above) is used to illustrate the proportion of sand, silt and clay in the main textural classes. The vertical axis is percent clay, the horizontal axis is percent sand, while the remainder of each class is percent silt. Thus, when sand is dominant, it yields a sandy- or coarse-textured soil, whereas a fine-textured soil is made up largely of silt and clay. The terms “light” and “heavy” are often used to refer to sandy- and clayey-textured soils, respectively, and are actually a measure of the power required to till the soil. These terms have nothing to do with the actual weight of soil, as a given volume of dry sand actually weighs slightly more than that of clay.

Textural class names such as sandy loam, clay loam, heavy clay, etc., are given to soils based upon the relative proportions of sand, silt and clay. Three broad, fundamental textural groups are recognized: sands, loams and clays.

SANDS - The sand group includes soils in which the sand particles make up at least 70% of the material by weight. Two main classes are recognized: sand and loamy sand. Sands are further broken down into different sand sizes such as fine sand or coarse sand.

LOAMS - The loam group is intermediate in texture between the coarse-textured sands and the fine-textured clays, and usually contain a significant proportion of each particle-size fraction. Class names include: sandy loam, silt loam, silty clay loam, sandy clay loam, clay loam and loam.

CLAYS - The clay group includes soils that contain at least 35% clay-sized particles, and, in most cases, more than 40%. Class names are: sandy clay, silty clay, clay and heavy clay. Soils of this group are often referred to as “gumbo”. 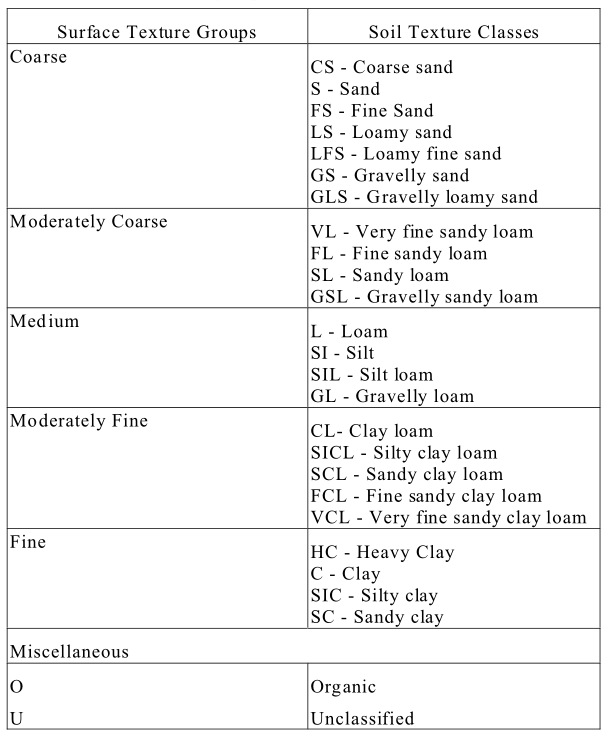 Organic soils contain minimal mineral components and so the surface texture is reported as organic. The unclassified class is used for areas in which surface texture has not been determined.