High sodium contents in the upper part of the soil can lead to a range of chemical and physical problems for plant growth. These high sodium or sodic soils occur naturally in Saskatchewan but can also occur due enrichment of sodium by human activity.

Typical Prairie soils such as the Chernozems have a high content of calcium and magnesium relative to sodium. Soil horizons where the ratio of exchangeable calcium to exchangeable sodium is 10 or less are labeled with an n subscript (for Na, the chemical symbol for sodium) and are classified as Solonetzic soils. The high sodium contents can lead to the loss of clay from the upper A horizon and its concentration in the B horizon, creating a textural contrast horizon (Bnt). More information is available on the Solonetzic soil in the Soil Classification section of this website.

When water with a low electrolyte content (such as rainfall or snowmelt) is added to a high sodium soil considerable dispersion of clay can occurr. This can lead to clogging of the pore space and reduces the ability to the soil to transmit water.

If a sufficient thickness of surface A horizon exists over the Bn or Bnt horizons, the Solonetzic soils can be as productive as their Chernozemic counterparts. Where the surface A horizons have been thinned or completely lost by erosion, the sodium-enriched horizons can cause the formation of a hardpan layer. These hardpans cause considerable problems for tillage and crop production.

The presence of highly soluble salts in the rooting zone of plants can cause reduced yields or, in the worst case, complete failure of a crop. Salinity occurs naturally in soils but can also result from mismanagement of the soil. 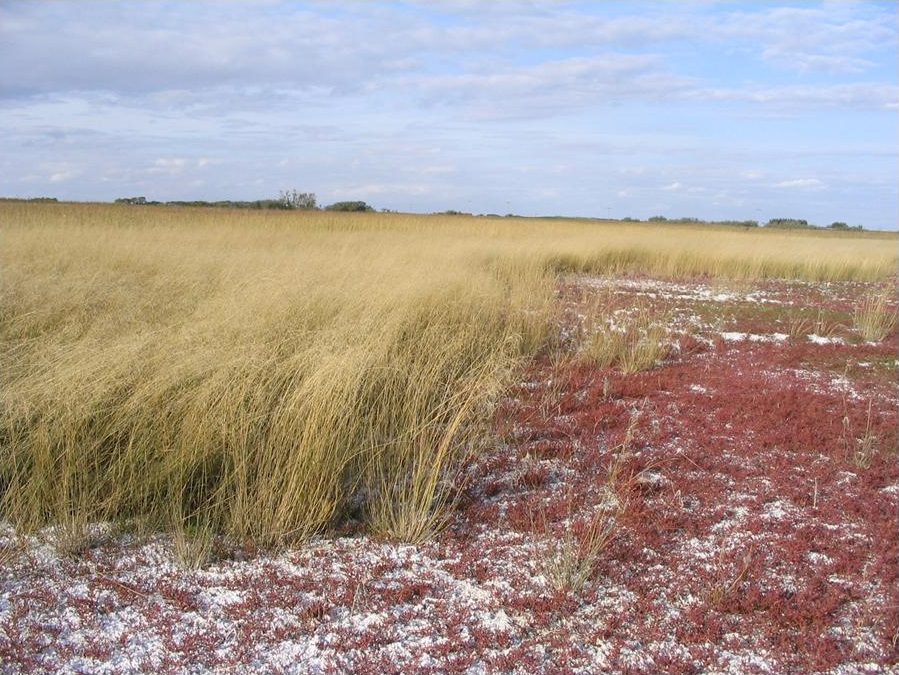 Salts occur naturally in many of the sedimentary rocks that the glacial parent materials in Saskatchewan are derived from. Slowly soluble salts such as calcium and magnesium carbonates and sulphates are, on the whole, beneficial for plants but sodium salts can limit plant growth.

Salinity problems in soils are most common where the naturally occurring salts in parent material have been dissolved by water moving through the soil and transported by groundwater flow. The salts can then be precipitated out of solution when the groundwater is lost to the atmosphere through evaporation or transpiration. This type of discharge can occur locally (as rings around sloughs or potholes or as hillside seeps) and regionally (through the discharge of large aquifer (water-bearing sediment or rock formations) systems). Salinity can also occur due to impoundment of water by humans – for example, at the edges of irrigation ditches or dugouts. Over-application of irrigation water is also a source of soil salinity by human activity.

The Canadian System of Soil Classification (C.S.S.C.) does a poor job of recognizing saline soils in the formal taxonomic levels. The two designations for horizons with salts are a lower-case s (for salts that are primarily inherited from the parent material) and sa (for salts that result from secondary enrichment through water discharge). They are often used with the C horizon (e.g. Csa or Cs) but can also be used with A and B horizons. These soils are only recognized at the phase level in the C. S. S. C. – for example, Rego Dark Brown Chernozemic, saline phase.

Research since the 1990s has increasingly recognized soil erosion by tillage as a major source of human-induced soil change on the Canadian Prairies.

Loss of soil due to tillage is greatest on highly convex surface forms such as the knolls that occur in hummocky till landscapes (see photo). Even at very low rates of erosion the cumulative effects of 100 years of tillage has been to remove the original A and B horizons from these knolls and expose the underlying calcium carbonate-rich subsoils at the surface.

Wind and water erosion have long been recognized as a major cause of soil degradation in Saskatchewan.

In water erosion, detachment of the soil can occur through two mechanisms. In the first, soil is detached by the impact of raindrops on the soil surface (raindrop splash); in the second, the flowing water itself detaches the soil particles. Transport of the detached soil is primarily carried out by flowing runoff water. In some cases, the runoff (and sediment within it) flows as a thin sheet over the surface of the land (termed sheet erosion or interrill erosion); where the depth of water increases, the flowing water cuts channels into the soil ranging in depth from a few centimeters to several meters deep. The shallow channels are called rills, the deeper channels are called gullies. As a generalization, rill erosion is more serious than interrill erosion, and gully erosion is the most serious of all. The potential for water erosion is greatest in portions of the landscape where water concentrates and reaches a sufficient depth to detach and transport soil.

The rates of both water and wind erosion have been substantially reduced in Saskatchewan due to the improved residue management practices adopted by Saskatchewan farmers. This widespread control of wind and water erosion is one of the major success stories of soil management in the past 50 years.