The Canada Land Inventory, established in 1963 under the A.R.D.A. program, provides a framework by which we can utilize soil survey information, apply specific criteria or rules, and interpret or create Soil Capability Ratings for different soil types. Many factors, including climate, steepness of slope, complexity of landform, soil structure, salinity, wetness, water-holding capacity, adverse fertility characteristics, stoniness, susceptibility to flooding, and damage from wind and water erosion are considered in making a final interpretation for a Soil Capability for Agriculture rating.

Fourteen different kinds of limitations are recognized as a result of climate, the soil, and the landscape. The limiting effects of climate are considered first as they affect the initial capability class of soils on a broad subregional basis. The agricultural area of Saskatchewan has been divided into six climatic subregions. Three climatic subregions 1Cm, 2Cm, and 3Cm are recognized on the basis of increasing aridity; three more climatic subregions 1Cs, 2Cs, and 3Cs are recognized on the basis of frost incidence and heat units expressed as degree days. These are followed by the limitations characteristic of the Soil Association and textural types within a subregion. The subclass limitations related to adverse physical, chemical and /or morphological soil properties include water- holding capacity, poor structure, low natural fertility and salinity. The final limitations to be evaluated are related to the characteristics of the landscape itself. Landscape limitations include adverse topography, excess water, excess stoniness, erosion damage from wind or water, inundation (flooding from streams or lakes), and shallowness to bedrock.

Class 1: Soils in this class have no significant limitations in use for crops

Class 2: Soils in this class have moderate limitations that restrict the range of crops or require moderate conservation practices

Class 3: Soils in this class have moderately severe limitations that restrict the range of crops or require special conservation practices

Class 4: Soils in this class have severe limitations that restrict the range of crops or require special conservation practices or both

Class 5: Soils in this class have very severe limitations that restrict their use to the production of native or tame species of perennial forage crops. Improvement practices are feasible

Class 6: Soils in this class are capable of producing native forage crops only. Improvement practices are not feasible

Class 7: Soils in this class have no capability for arable agriculture or permanent pasture.

Class O: Unimproved or virgin organic soils are not rated for soil capability. They are not included in classes 1 to 7, and are designated by the letter ‘O’.

As a general ranking of soil capabilities, Class 1 can be considered as excellent, Class 2 as good, Class 3 as fair and Class 4 as poor, for the production of common field crops. With a high level of management, it is entirely possible to reduce the risk of farming some Class 4 lands and obtain reasonable yields over the long term

The capability subclass represents a grouping of soils that have the same kind of limitations for crop production. If more than one limiting condition is recognized in a particular area, the subclasses are listed in order of their importance.

Limitations due to climate are caused by deficiencies in the amount and distribution of precipitation, length of growing season, frost free period and amount of heat units available for plant growth.

Subclass D: Depicts adverse soil structure in the upper layers (A and B horizons) that affects the condition of the seed bed, prevents or restricts root growth and penetration, and adversely affects moisture permeability or percolation. 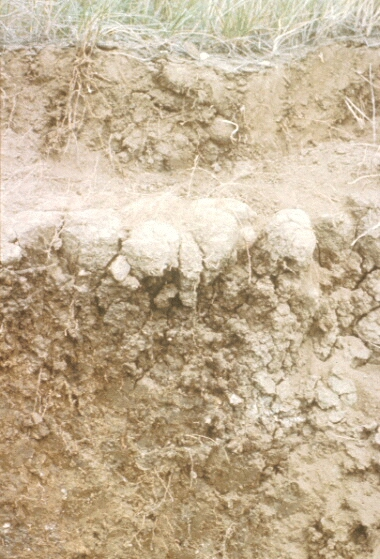 The profile on the right demonstrates adverse (dense) soil structure in the subsoil of a Solodized Solonetz. This structure occurs within the rooting zone and inhibits water infiltration, as well as plant root development and exploration for nutrients and subsoil moisture. Such a soil area would be rated as Class 4D. 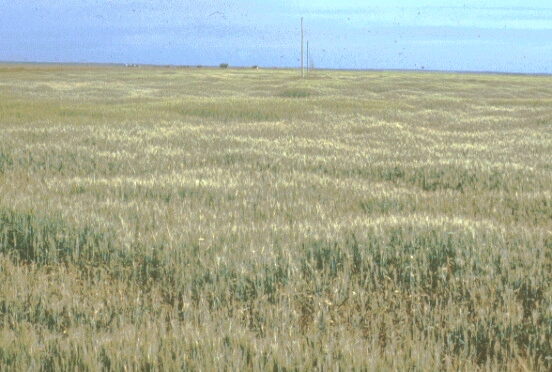 This photograph illustrates the impact of adverse soil structure of a Solodized Solonetz soil on a cereal crop. The crop is shortest where the soil structure is most severe (hardest).

Subclass M: Depicts an insufficient soil water- holding capacity due to the combined effects of the textural characteristics of the top 1 meter and by the organic matter content of the surface horizon. 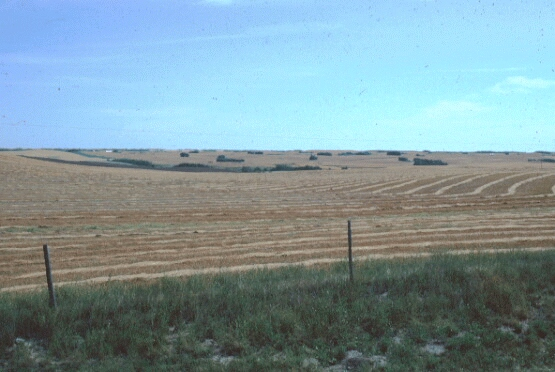 This photograph illustrates a typical Class 2M area with significant wet depressional areas that would be rated as Class 5W.

Subclass N: Depicts excessive soil salinity and applies to soils with either high alkalinity or a sufficient content of soluble salts to adversely affect crop growth or the range of crops which can be grown. 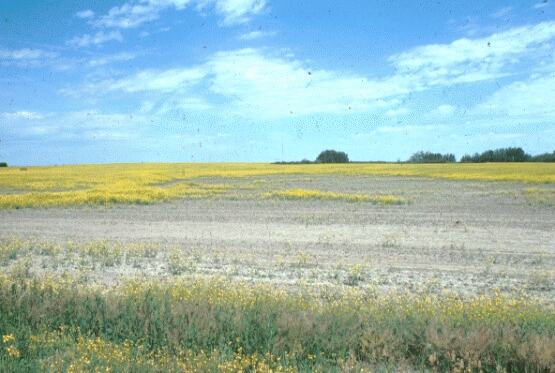 This field of Canola has a significant area that is affected by severe salinity, which would be rated as Class 5N. Tolerance to a certain level of salinity varies from one crop type to another. Cereal grains, particularly barley and oats, are more tolerant than Canola; some forages are more tolerant than cereals

Subclass S: Adverse soil characteristics. It is used in a collective sense in place of subclasses m, d, f, and n where more than two of them are present or where two of these occur in addition to some other limitation. For example, areas of dune sand are characterized by limitations due to insufficient water-holding capacity (M) and low fertility (F) coupled with erosion damage (E). The capability for these areas is often expressed as 6SE.

Limitations due to adverse characteristics of the soil landscape. 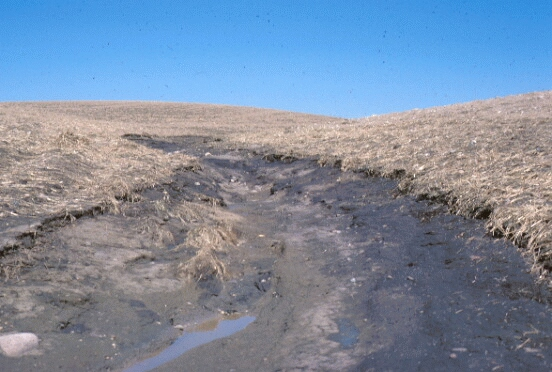 Severe water erosion has occurred in this hummocky-dissected landscape after a heavy rainfall. Grassed water runways are required to prevent loss of large volumes of nutrient-rich top soil. The area damaged by water erosion would be rated as Class 5E. 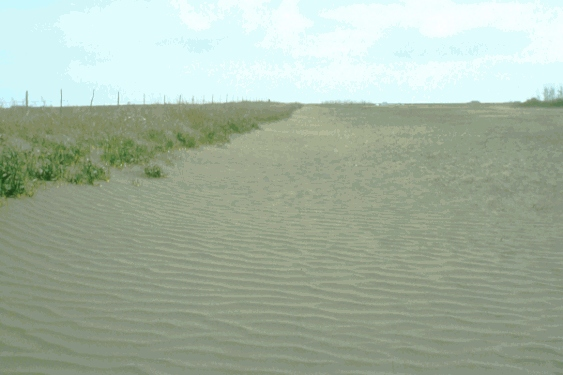 The sandy soils in this field have very little clay content and have been subject to moderately severe wind erosion. The area damaged by wind erosion would be rated as Class 4E.


Subclass I: Depicts a limitation due to inundation and applies to soils subjected to flooding by lakes or streams, but does not include local ponding in undrained depressions.

Subclass P: Depicts a limitation caused by excess stones. It applies to soils that are sufficiently stony that the difficulty of tillage, seeding and harvesting are significantly increased. 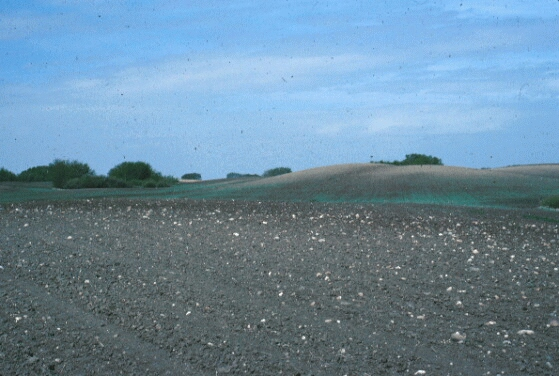 The gently sloping landscape in the foreground, if comprised of a loam soil in the Black soil zone, would normally be rated as Class 2M. The density of stones present would, however, cause this landscape to be downgraded to Class 3P.


Subclass R: Shallowness to bedrock. This applies to soils where the rooting zone is restricted by solid bedrock. This limitation has limited application within the agricultural area of Saskatchewan as most soils are developed on various forms of unconsolidated glacial deposits or on weathered shale and sandstone.

Subclass T: Depicts a limitation in agricultural use of the soil as the result of unfavorable topography. It includes hazards to cultivation and cropping imposed by increasing degree of slope as well as by the irregularity of field pattern and lack of soil uniformity. 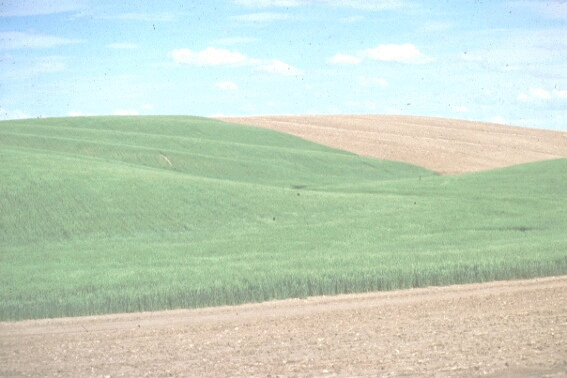 The soil landscape on the right would be rated as Class 4T due to a moderately severe slope limitation. This area would be considered marginal for the production of common field crops. 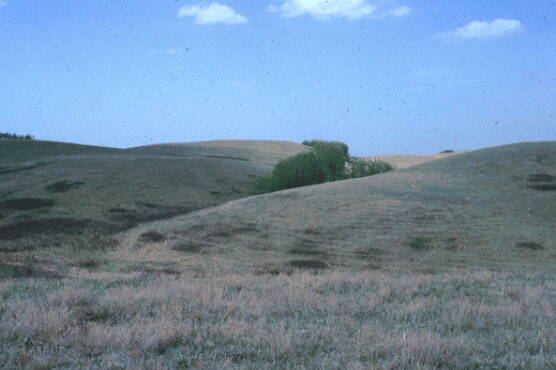 The soil landscape on the right would be rated as Class 5T due to a severe topography (slope) limitation, and is not considered suitable for the production of common field crops. Such landscapes are at best suited to use for improved forage or else for native grazing.


Subclass W: Depicts a limitation due to excess water caused by either poor soil drainage, a high groundwater table or to seepage and local runoff. This does not include limitations that are the result of flooding. 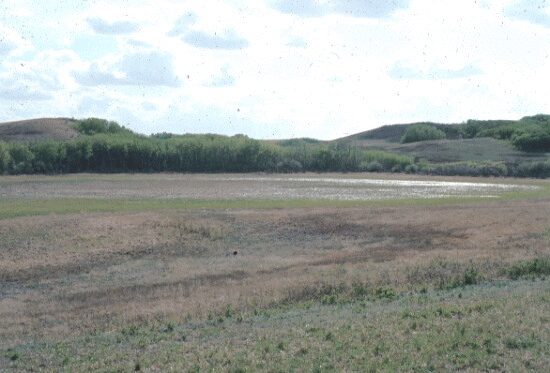 The above wetland would be rated as Class 6W due to severe wetness. Under normal climatic conditions, water will remain in such a wetland well into the fall. Some native grazing might be possible around the perimeter of this wetland in late summer.


Subclass X: Soils having a moderate limitation due to the accumulative effect of two or more adverse characteristics of the soil and the landscape which singly are not serious enough to affect the class rating.

This means that all of the soils in this area have been rated as Class 3 (Fair) due to a moderate moisture limitation.

It is important to note that Soil Capability Ratings are based on the 1:100,000 soil polygon information which describes the dominant soils that occur in a delineated soil area. Individual fields are not rated and may have somewhat different properties from the general soil area. It is possible that highly contrasting soil or landscape features of minor areal extent (usually less than 5%) may occur in a soil area but will not be represented at the publication scale. A field specific examination and evaluation may be advisable as a final check before a decision is made to utilize a field for a crop that requires very narrow or specific soil characteristics.